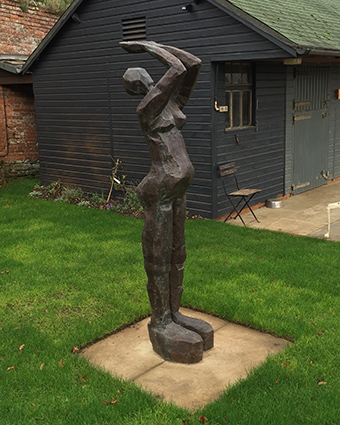 Very pleased with this recently installed commission, so I thought I would share the experience and processes (in summary).

Working closely with a client and garden designer Mary Bullock, I created a smaller scale model (often referred to as a maquette) for client comment/approval.

Once approved, a carefully replicated full size version of the model was created in a material similar to polystyrene and wax – This figure was then signed off by the client and declared ‘ready for casting’.

Having completed the casting process, a considerable amount of time was spent finishing and achieving the desired patina. Back on site – A special base had been prepared to take her ‘now’, quite considerable weight.

Install was a relatively painless and relaxed affair but did involve two installers from the foundry and a number of ‘volunteer’ husbands drafted in as additional muscle. As I said earlier she is exceptionally heavy.

Now firmly in place – she will only improve with time.

If you wish to discuss a similar project or just an idea, please get in touch.